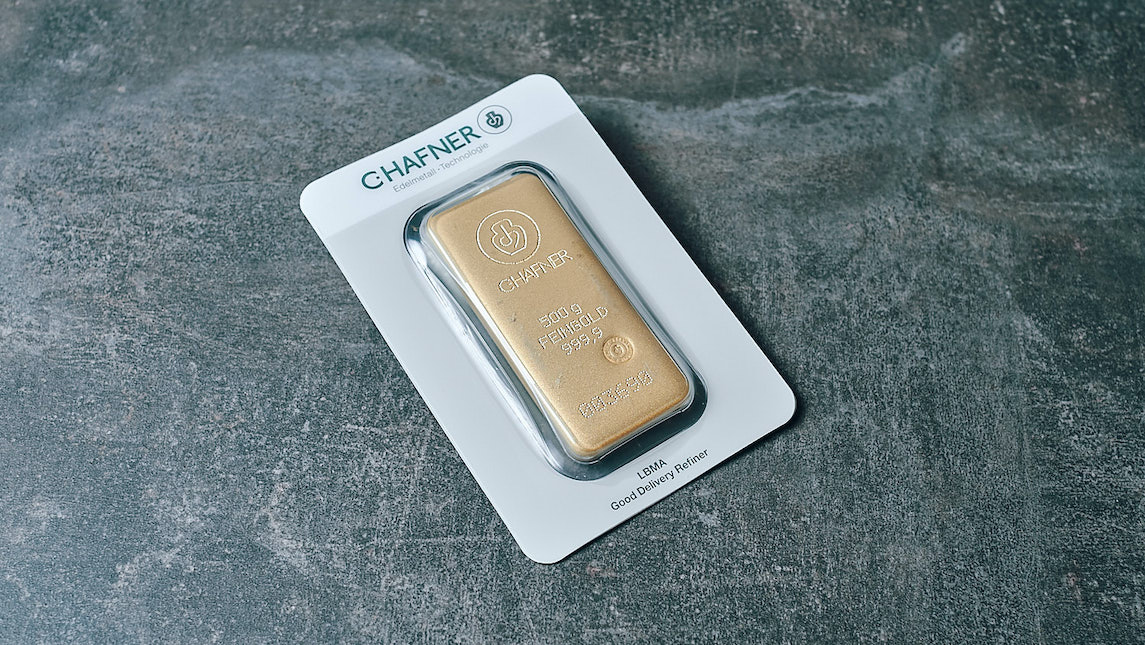 Despite high inflation rates, the gold price has been falling in recent months, and little will change in this regard for the time being. However, with the recession likely to start in winter, the cards will be reshuffled.

The euro area inflation rate rose to 9.1% in August, a new high in the history of the European single currency. But very high rates are also being reached outside the euro area, for example most recently 8.0% in the USA and even 16.1 % in Poland. An investment in gold is considered a classic protection against inflation, but there is little sign of this at the moment. Despite the far above-average devaluation of money, gold has fallen in price since the last publication of Fokus Edelmetall (Focus on Precious Metals) in mid-May from around US$1,850 per troy ounce (€56.00 per gram) to most recently around US$1,710 (€55.30). How can this be? 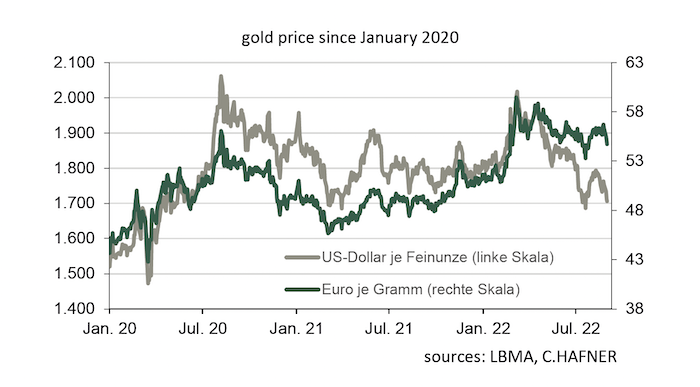 One answer to this question is that gold has indeed proven to be a protection against inflation in the past. However, this was mainly the case over very long periods of time and not necessarily in the short term. When considering months or even a few years, other factors are more decisive. Secondly, the gold price anticipated part of the current demonetization several years ago. It is true that the high inflation rates in recent months are largely due to the rise in energy prices caused by the war in Ukraine. But it is also a fact that inflation rates were already above average at the end of 2021, for example 5.0% in the Eurozone and 6.6% in the US. And the famous economist Milton Friedman had already recognised in the 1960s that “inflation is always and everywhere a monetary phenomenon”. This is no different today. Roughly summarised, the reduced supply of goods due to the Corona pandemic and global supply issues as well as the energy shortage act primarily as triggers for the current hyperinflationary phase. However, it is basically due to the sheer strength of the expansion in money supply in recent years. As is well known, the so-called cheap money policy of the major central banks has been long criticised as a mistake by many observers. It has fuelled widespread interest in gold investments, and for this and other reasons, the price of gold has roughly tripled since the end of 2007.

Seen in this light, the prices of everyday items such as food are currently catching up with at least part of the earlier rise in asset prices, including not only gold but also, for example, real estate and artworks. In the coming months, high inflation is likely to put some pressure on the gold price. On the one hand, many people will have to spend their income entirely on buying essential food and on increased heating costs, meaning fewer and fewer households will therefore have money left over for luxury goods such as jewellery. On the other hand, the US Federal Reserve is now taking the fight against inflation very seriously. It will therefore continue to raise its key interest rate sharply, which usually weighs on interest-freegold.

However, a recession is becoming increasingly likely in the coming months, both in the US and in Europe. As soon as the bottom of the economic development has been reached and the central banks signal key interest rate cuts, the probability of a rebound in the gold price increases.