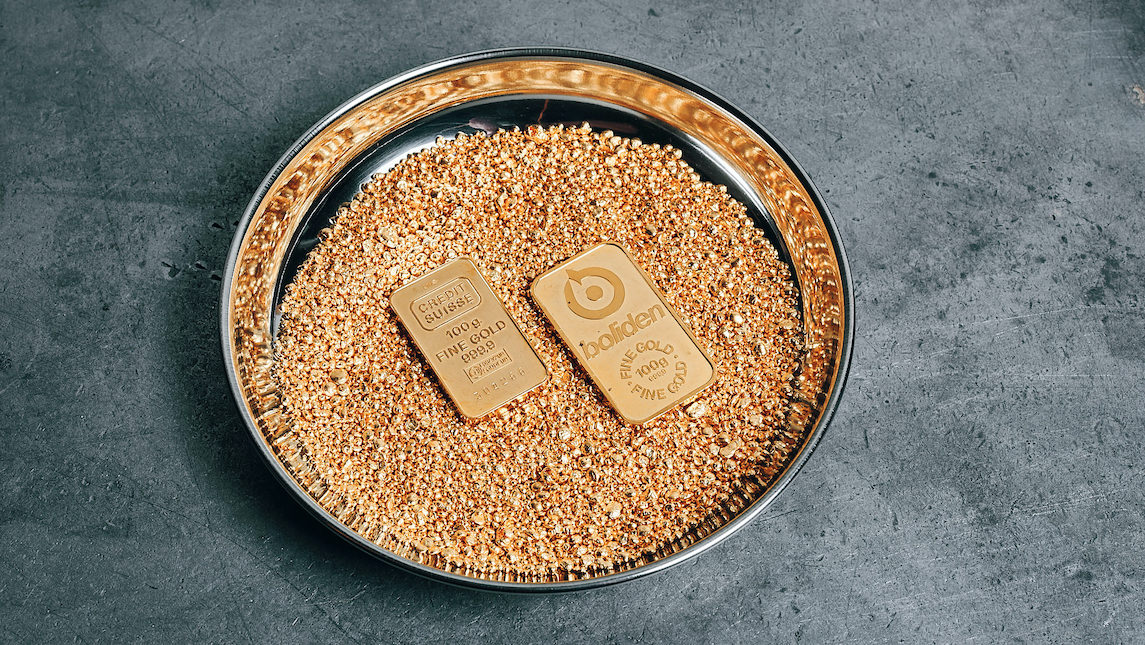 Brightening on the capital markets causes gold price to rise

Gold is currently moving in the same way as the international stock and bond markets. After a gradual decline in recent months, the price rose again in November due to the US Federal Reserve’s interest rate hikes, which will presumably be not as large in the future. However, the change in direction is only likely to become truly sustainable in the event of a recession.

After the publication of the last Focus on Precious Metal at the beginning of September, the gold price initially continued the downward trend that had existed since March, with fluctuations. At the end of September, the price fell to a low of around US$1,620 per troy ounce, and after a temporary rebound, the precious metal was also traded at this price at the beginning of November. However, this was followed by a rapid increase in price of around 11% to almost US$1,800. The downward trend thus seems to have been broken for the time being. Gold now costs almost as much in US dollars as it did at the beginning of the year. 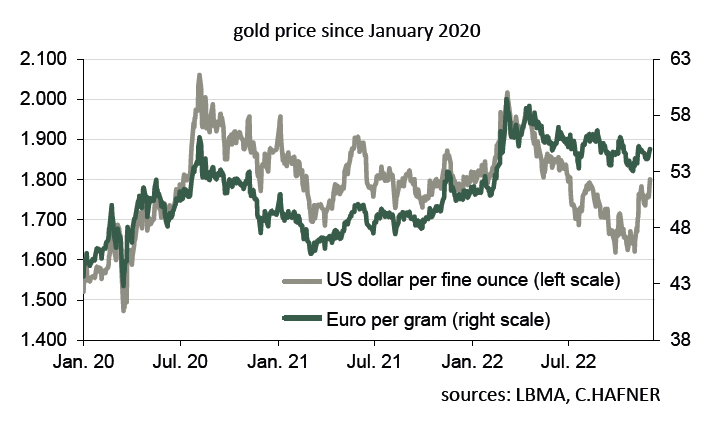 In euros, however, the development looks completely different. Firstly, at just under €55 per gram, gold costs significantly more on the precious metals exchange than at the beginning of 2022, when it cost around €51. Secondly, the fluctuations have been less pronounced recently. Since the beginning of November, it has increased only 3%. Moreover, the downward trend is still intact, as the chart above shows. The reason for the difference in price trend, or rather the increasing spread over several months between the euro-gold price (green line) and the US dollar-gold price (grey line) in the chart above is once again on account of the exchange rate. The euro and other Euro-pean currencies such as the British pound or the Polish zloty depreciated strongly against the US dollar from spring to the end of September. The decline of the gold price in US dollars, therefore, had only a muted effect in Europe. Conversely, the rise in the gold price in the last four weeks was accompanied by a rise in the value of the European currencies against the US dollar. The increase in the price of gold in Europe was, therefore, not as drastic, and the gap displayed was able to close again to some extent.

Changes to the exchange rates are not only suitable for explaining the smaller price fluctuations from a European perspective, but also as an explanation for the ups and downs of the internationally more important quotation of gold in US dollars. The following chart shows the strikingly strong correlation between the precious metal and the US dollar/euro exchange rate since the beginning of 2022, which often also applies to other commodities such as oil. The stronger US dollar, expressed in the chart below by a fall in the exchange rate of the euro, has been accompanied by a falling gold price and vice versa. An exception to this rough rule of thumb is of course possible. For example, in the weeks leading up to the start of the war in Ukraine, fear in the markets caused the price of gold to rise with a simultaneous appreciation of the US dollar. However, the importance of the US dollar for the gold price development should not be overstated. This observation only scratches the surface. 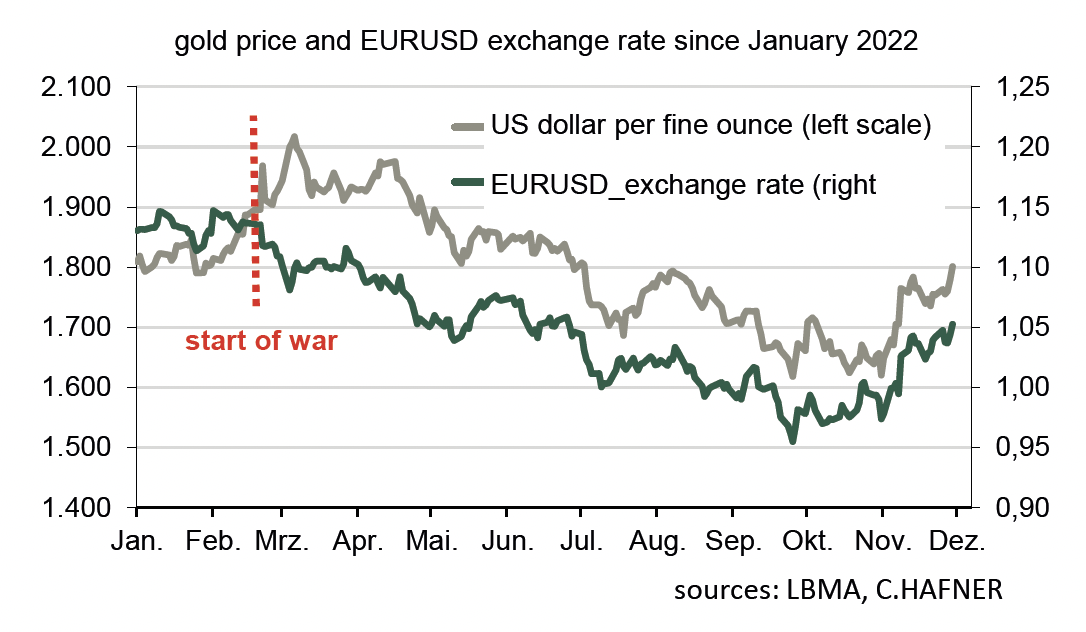 The actual reason for the movement of both variables in recent months was the policy of the US Federal Reserve. And this is not likely to change in the near future. High inflation prompted the Federal Reserve System to raise key interest rates sharply by a total of 3.75 percentage points since the spring. This made the US dollar attractive against other currencies with less pronounced interest rate hikes, such as the euro, while at the same time the interest-free investment gold became less attractive. Especially institutional investors such as pension funds therefore sold the precious yellow metal. The gold holdings of physically backed exchange traded funds fell by 390 tonnes since mid-April. The previous increase in holdings due to the war in Ukraine was thus completely wiped out again. And the physical gold purchases by private investors, who bought an above-average number of bars in October, for example, were not enough to compensate. In recent weeks, however, there have been increasing indications that key interest rates will be raised less quickly in the future. Presumably, an interest rate hike of only 0.5 percentage points will probably be decided in the USA in mid-December. Previously, the hikes were 0.75 percentage points four times in a row. There are good reasons for this probably more cautious approach. Inflation may have already peaked in the USA, and the central bank wants to wait for the effect of the previous interest rate hikes. Typically, these only lead to a cooling of the economy after 6 months, which is why it is very difficult to calculate exact amounts. In the business world, this problem is compared to driving a car where you can only look in the rear-view mirror. The deceleration of the tightening of monetary policy that is now ahead of us had a decisive influence on the stock exchanges in the last few weeks. Prices rose on the stock exchange as did the price of gold, while the US dollar lost some of its strength and depreciated somewhat against the euro and other currencies. However, it is not certain that these movements are sustainable.

In the end, the US Federal Reserve did not signal any key interest rate cuts but rather increasing interest rates in smaller steps and then maintaining the higher interest rate level. So far, however, this has been largely ignored on the global capital markets. In addition, the onset of a recession in the US and Europe is becoming increasingly likely for the coming months. This should be discussed in more detail with a focus on precious white metals. In any case, this means that the price of gold may be volatile over the next few months. Whenever new economic and inflation data shows that a reduction in key interest rates in the USA is far from in sight, gold is likely to be weighed down. On the other hand, the effects of the economic slowdown should gradually become more noticeable, and a recession tends to be positive for gold prices. 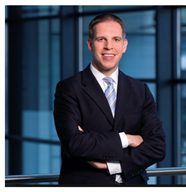